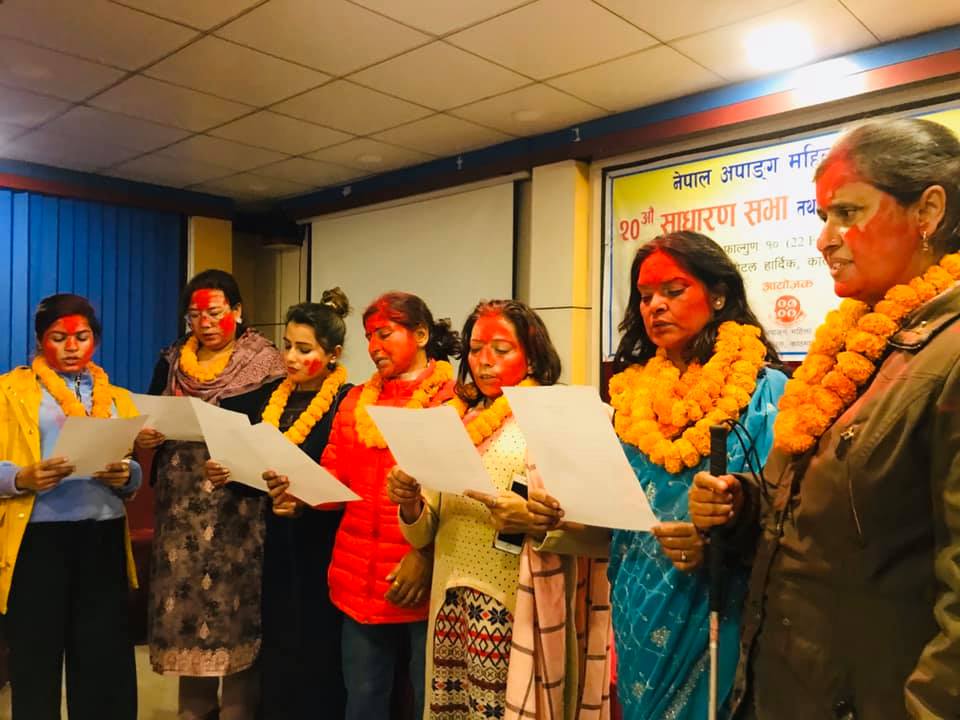 Nepal Disabled Women Association has successfully completed its 10th Annual General Assembly and 20th annual general meeting on 22nd February 2020 at Hotel Hardik, Bagbazar, Kathmandu. Altogether 82 people had participated where 69 were members, remaining 13 were staffs, parent of children with disability, supporter for women with disability in the program.

The program was organized only participating the women, no men had invited there except advocate. This seems the sign of women empowerment. Founder, executive members, general members and staffs, supporter had involved in the program. Firstly, the formal session was conducted by lighting in big pot of water (Khadkulo), where 7 women of 7 province, executive committee and founder had participated.

Mr. Mukunda Dahal, advocate had facilitated the election process. All the participants had congratulated the newly elected members and conveyed best wishes for upcoming days. The former chairperson Ms. Nirmala Dhital had delivered short speech and wished for better day ahead to new executive team.

In the same way the current chairperson Ms. Tika Dahal had committed to lead NDWA for its better future and collaboratively march ahead including all type of disability. In this committee, we can see only two type of women having disability are in leading position, most of them are women having physical disability. Most of them are from urban and Terai areas so diversified women with disability should also incorporated. All the participants has expected that their hard work, innovative ideas and enthusiasm of new team support NDWA to grown up more effectively.