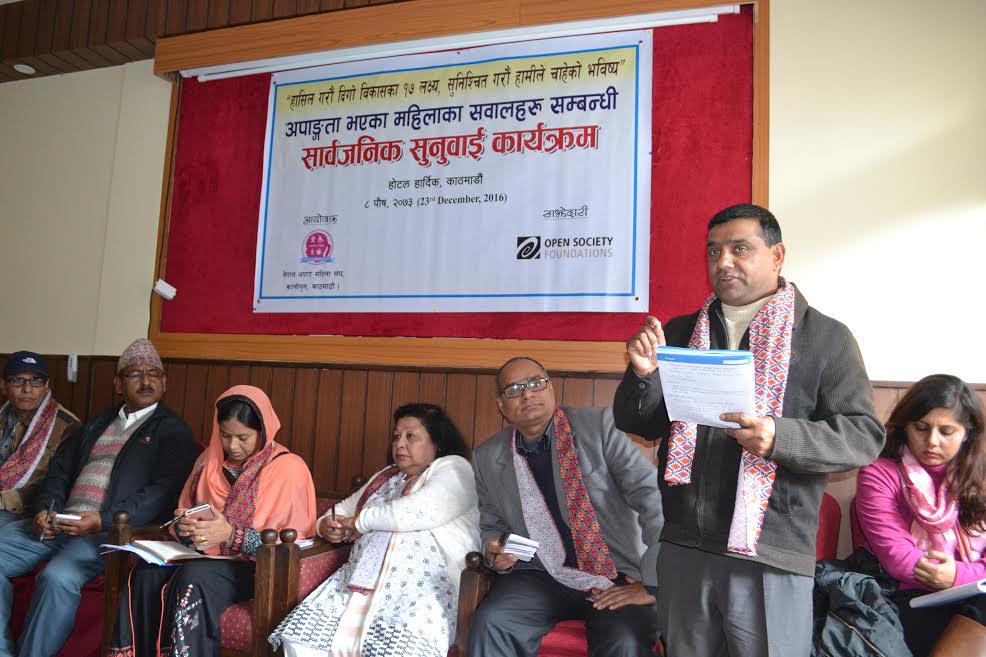 Women with disabilities are three times likely to be raped, physically abused and sexual assaulted, according to Human Right Watch. They usually are abused by someone they know, such as partner or family members in addition, they also face the risk of abuse by health care providers and care givers. More disabled women victimized by rape after the earthquake. According to the data of Dhading and Gorkha districts in this fiscal year 72/73 (July2015-july 2106) 426 cases registered in Dhading District Police office and  211 cases of women registered in Gorkha District Police Office, where 17 women suffered by rape.

In this context, Nepal Disabled Women Association has been providing relief packages after devastating earthquake in the beginning. Likewise it has been conducting capacity development program, lobby, advocacy, interaction program, skill based training in those affected districts. It has been also implementing a project on ‘Post-Earth Quake Situation: Strengthening Justice of Women with Disabilities with support of Open Society Foundation.

It has been organizing various activities under this project.

Ms. Laxmi Neupane, Program Coordinator of the NDWA was the facilitator of the National Level public hearing program and welcomed to the participants. Ms Nirmala Dhital, Chair Person of NDWA highlighted the objectives of the program and presented a presentation on the issues and conclusion of the public hearing program of Gorkha and Dhading districts among the national level key stakeholders and Policy Makers. Ms. Teeka Dahal, Senior Advisor and the Vice Chair of the National Federation of Disabled Nepal expressed vote of thanks for active participation of the participants.

The Chief District Officers, Senior Doctors of district hospitals, DSP of District Police offices, representative of Women Children Offices, representative of District Education Offices of Gorkha and Dhading were present in the program. They made accountable towards the issues of Person/Women with disabilities and expressed their commitment to take the initiation for addressing the issues of person/women with disabilities.

The key issues and problems of Person/women with disabilities of Gorkaha and Dhading shared among the center level key stakeholders and decision makers. Honorable Mohana Ansari, Member of National Human Right Commission, Chief of the Disabled Rights Promotion Division, Ministry of Women Children and Social Welfare Mr. Keshab Bhattarai, Mr. Ghanesh Paudel, Division of Inclusive Education, Ministry of Education, Under Secretary of Access to Justice Commission, Supreme Court Mr. Loknath Parajuli, Senior Advocate Ms. Meera Dhungana and representative of National Women Commission were present in the program.  They deeply discussed on the issues of person/women with disabilities and made accountable towards the issues. They expressed their commitment to take the initiation for addressing the issues of person/women with disabilities.

The public hearing of Gorkha was conducted at District Development Committee hall. At that time the hall was not disabled friendly. So NDWA also raised that issue. Now the DDC has made ramp to entered DDC hall. The wheel chair users can enter in DDC hall easily.

At Dhading district the administration of district was in 5th floor. So NDWA strongly raised that issue in public hearing program. Now the hospital administration division started to provide service from the ground floor for disabled and sick people those who need.

Now the WWD/PWDs don’t need to sit in queue and if they demand free treatment the hospital also provide that.