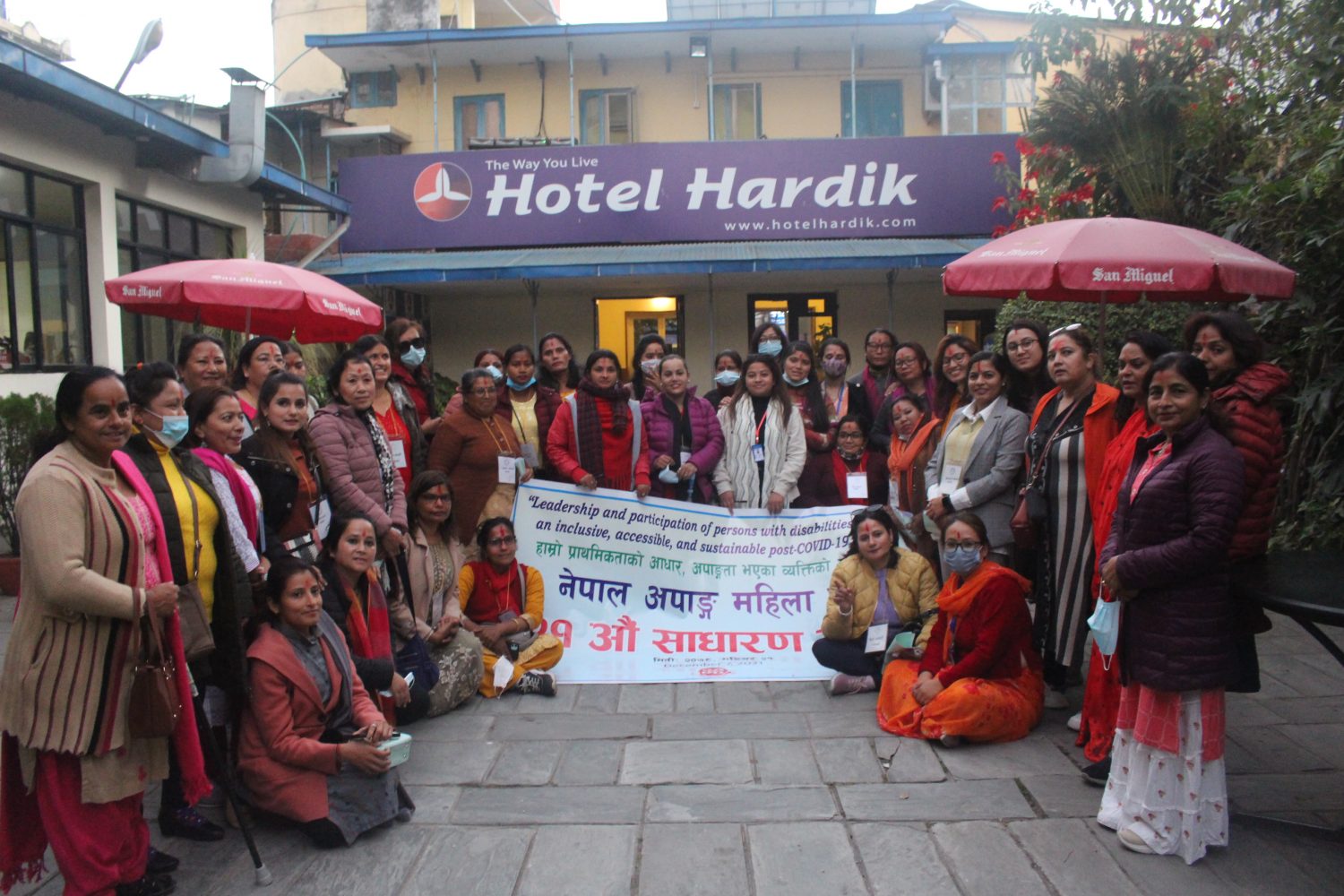 Nepal Disabled Women Association (NDWA) successfully completed 21st Annual General Meeting on 7th December 2021. The program was divided into two phase – formal and informal. Firstly, the program was chaired by Chairperson of NDWA, Tika Dahal and guest of the program were Ms. Rama Dhakal (vice chair, NFDN), Ms. Nirmala Dhital (chair, National Federation of Women with disabilities), Devkala Parajuli, (Central member of Rastriya Prajatantrik Party), Laxmi Devkota (chairperson, National Association of Deaf and Hard of Hearing (NADH)), Mukunda Hari Dahal (Advocate and parent), Consultant Shiva Rayamajhi. Then the program proceeded with the welcome speech by Shova Bista Khatiwada (Treasurer, NDWA).  Inauguration of the program was completed by lighting at Panas from the chair and guest of the program. As Devu Parajuli was elected as central member from Rastriya Prajatantrik Party, she was honored for her progress in political life.

After that draft of strategic planning documents was presented by Mr. Shiva Rayamajhi, who was the consultant for the preparation of the documents. NDWA prepared the draft in two days discussion meeting with board members and staffs. The document was the road map for 5-year plan. Some suggestions were collected for the finalization of the documents, like – Unicode typing should be compulsory for organizational strengthening, specific clarification should be needed in digital technology, similarly political alignment should be silent in organizational development, sign language interpreter is needed at office. Then guests were called for short speech. All the guest reminded starting days of NDWA where there was no support to march ahead, only 8-9 members carried the organization, it was very hard to get budget and program, supporting partner did not believe in the capacity of women with disabilities, gradually the executive members enhanced their capacity, worked hard and got small projects at 2006, then in 2007 they established office at Kalopul. All the guests wished better future of NDWA and more coverage and suggested to respect every members, and leave no one behind so that more marginalized group can be covered. After the valuable speech from the guests, the formal session was ended and closing session for AGM started. Where the chairperson had provided vote of thanks to all the guests along with members who had provided their valuable time in the program, she said that, they were always present in our program when we had invited them. A silence was held in honor of Tilakrani Tharu, member of NDWA (Banke), who passed away due to COVID-19 in previous month. Then in previous AGM it was committed to correct constitutions of NDWA, so the corrected part was presented by advocate Mukunda Hari Dahal. Correction was done by ‘bidhan correction committee’ comprising of three members, Nirmala Gyawali (vice chair, NDWA), advocate Sunita Thapa and Mukunda Hari Dahal. Some suggestions were provided by members, like, we should cover more marginalized groups, like women with disabilities from Muslim community, LGBTIQ community, etc., how to sustain the program, should we always expect budget from donor or make micro finance to self-help group? Some requested identity card for members and suggested to establish resource center in NDWA’s rehabilitation center. Furthermore, all the participants decided that, number of executive members should be 15, entry fee for new member should be NPR 500 and renewable charge NPR 200.